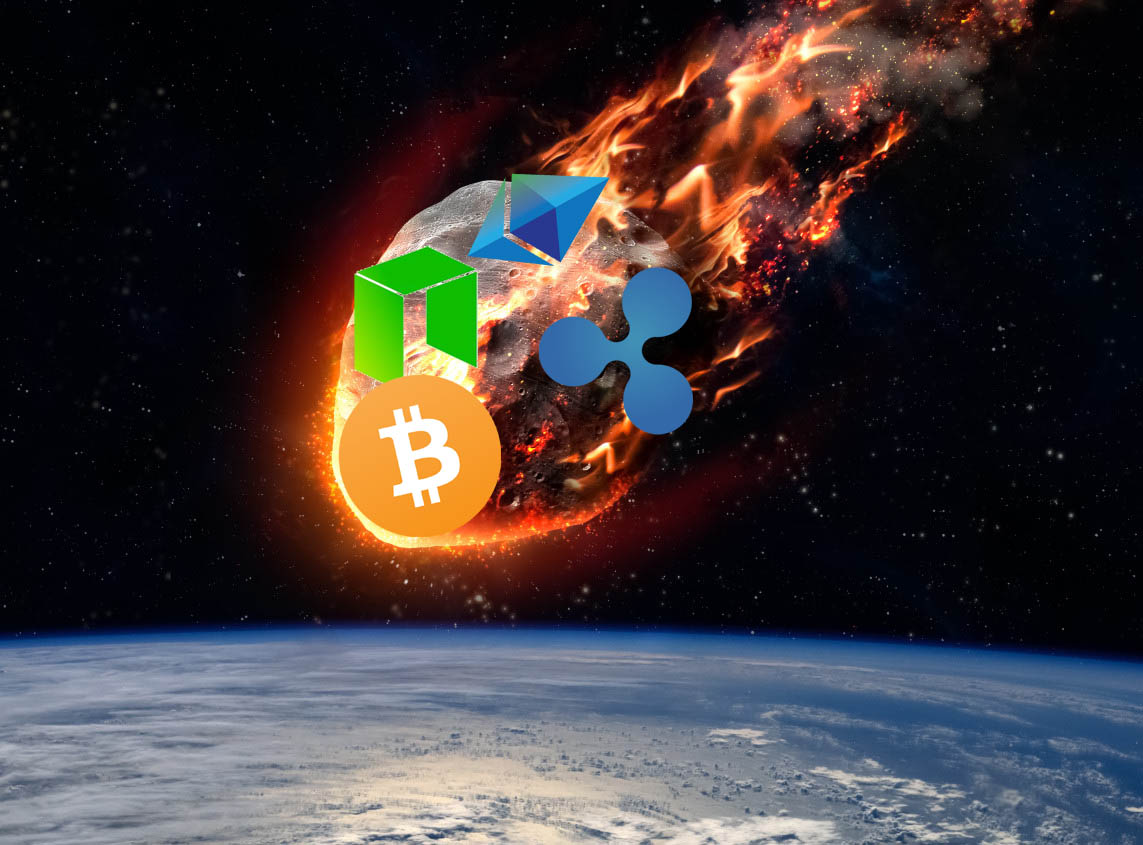 What has been described as “Black Tuesday” in the cryptocurrency space is showing no signs of respite. After the market dropped over $225 billion in just 24 hours, the total market capitalization of all cryptocurrencies is reaching new lows. On Wednesday, the market dropped another $64 billion to hit a low of $414 billion – the lowest it has ever been since Early December.

Bitcoin, the world’s leading cryptocurrency, plunged below $10,000 this morning after it was just showing signs of recovery from the ‘crash’ that happened on Tuesday. Expectations of its price resurfacing above the $12,000 – $14,000 range were dashed as the price of the largest digital currency in the world dipped to $9,446. According to data from CoinMarketCap, the last time the price of Bitcoin was below $10,000 was on the 1st of December.

Since Bitcoin is one of the two main cryptocurrencies that are used to trade altcoins, most of the top cryptocurrencies were severely affected by the crypto behemoth’s crash as well. Ethereum, Ripple, Bitcoin Cash, and Cardano all recorded lows, some even shedding over 50 percent of their market caps. The coin that suffered the biggest loss, however, is the Bitconnect cryptocurrency, which nosedived over 90% following news that the company behind the coin is planning to shut down its platform amid accusations of it being a Ponzi scheme.

At the time of writing, the market has recovered somewhat, albeit not showing any conclusive signs of stabilization just yet. Market analysts believe that the price of Bitcoin could shift in both directions over the next few days – it can either go above $12,000, or it can continue its descent and test $8,000-levels.

Why Did This Happen?

This week has been a period of turmoil for the world of cryptocurrencies, with the news of various governments issuing regulatory enforcement on cryptocurrency trading causing waves of Fear, Uncertainty, and Doubt (FUD) across the market. The withdrawal of large investors from the South Korean market that was followed by the panic selling by mainstream investors is perhaps the main reason behind the major price correction in the cryptocurrency market this week.

Another reason behind this violent correction would be the huge amount of dumb money that came into the market at the end of 2017 by people who see cryptocurrencies as a form of short-term gambling instead of a long-term investment.

“Focus has shifted to negative regulation with headlines out of South Korea, China, and even minor headlines from France and the U.S.,” Ari Paul, chief investment officer at cryptocurrency investment firm BlockTower Capital, said in an email interview with CNBC. “These headlines are having an outsized effect because cryptocurrency as a whole was overbought and sentiment reached exuberant levels, setting the stage for the violent correction that we’re seeing.”