Along with the recent slump in the cryptocurrency market, the general public’s interest in crypto-related jobs has waned, according to research by one of the biggest employment search engines in the world, Indeed.com.

The cryptocurrency market has had a pretty bumpy start to 2018. With most coins reaching their all-time highs (ATHs) in January, the market turned bearish soon after that. Today, the market capitalization of all cryptocurrencies stand at a mere $300 billion, almost 64% down from its peak at $832 billion in early January (data from CoinMarketCap).

The prices of some of the biggest cryptocurrencies have taken a beating as well. Bitcoin shed close to 60% of its ATH price as it struggles to hang on to the $8,000 support at the moment. Ethereum correction was worse – going from $1,425 all the way down to $440, almost a 70% loss in value.

As these corrections were rather violent and disconcerting to new investors, they also tested the general public’s interest in the cryptocurrency world. According to a report released by Indeed.com on Wednesday, searches about cryptocurrency-related jobs has decreased ever since reaching its peak in December 2017. 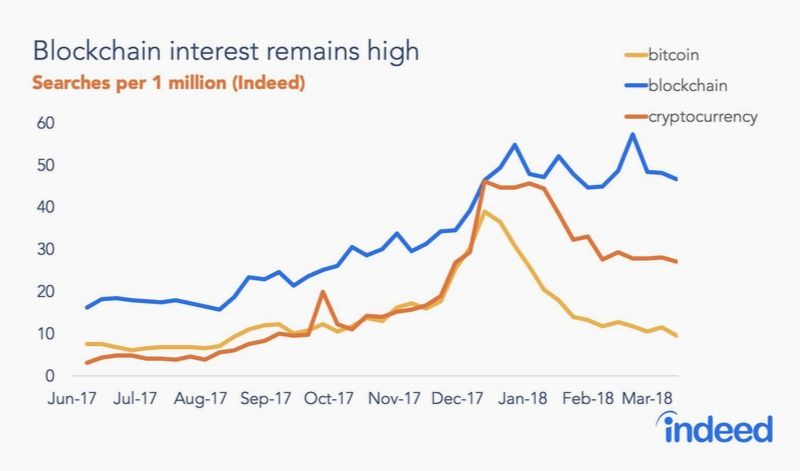 However, fast forward 3 months, and we see the search frequencies for the terms “bitcoin” and “cryptocurrency” decline by 76 and 41 percent respectively, which is reflective of the general downtrend in the cryptocurrency market over the last couple of months.

Below is an excerpt from the report:

Despite this, searches for jobs related to blockchain has not seen a decrease as drastic as “bitcoin” or “cryptocurrency”, with 47 searches per million in the current day. Based on this, Indeed came to a conclusion that although the hype about Bitcoin or other cryptocurrencies has been decreasing, the interest in blockchain and its applications is still going strong.