Ethereum for Syria with CryptoCountries & Unicef

Recently, the cryptocurrency world has been swept over by a new craze – games that are built on the blockchain, which is the same technological breakthrough that made things like Bitcoin and Ethereum possible. One prominent example in this field is CryptoKitties – a game that allows you to collect adorable, virtual kittens like traditional collectibles, secure in the knowledge that the blockchain will track ownership immutably.

Today, the world of blockchain-based games face a new contender, CryptoCountries. However, CryptoCountries is more than just a game – it creates a real crypto collectible with profit possibilities, as gamers and crypto enthusiasts are given the opportunity to claim ownership over their favorite countries.

“Imagine being the emperor of the world and own Countries such as The United States, China or Thailand.”

CryptoCountries is an interactive crypto-collectible game that lets anyone buy and own countries as Smart Contracts on the Ethereum Blockchain. As soon as you acquire a country, you take ownership of that nation and it automatically increases in price. 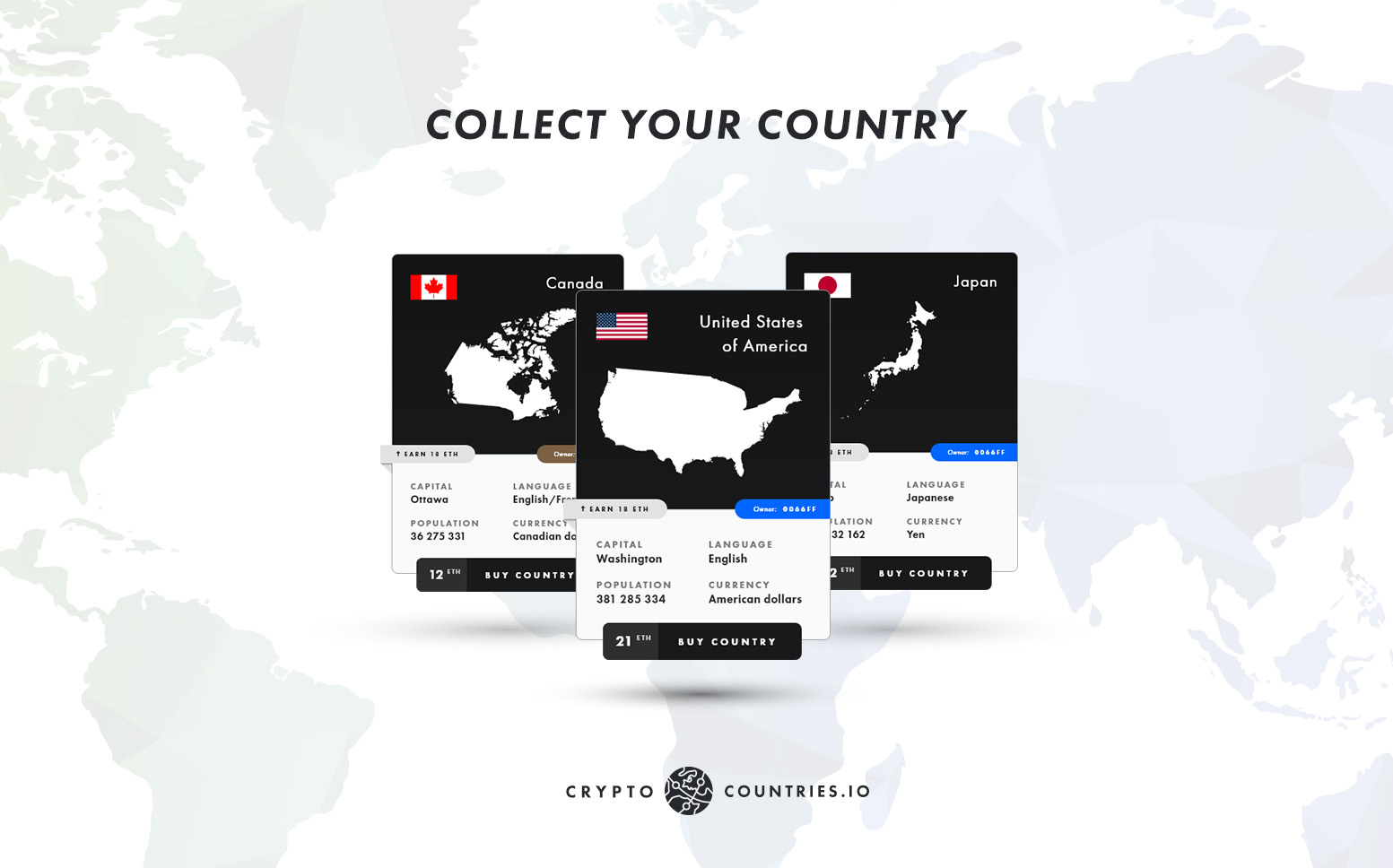 CryptoCountries has been gaining speed and reputation for its fun and intense economic environment. Here’s a glimpse of how the game works:

In this game, players collect crypto collectibles and take over the world. Players buy and sell countries as Smart Contracts, and the map in the game runs according to the time in the real world. Once a player buys a nation in the game, it automatically doubles in price. As a player, you can conquer any available country on the map as long as you have the funds to purchase it, but this also means that anyone else can purchase and conquer the countries that you own as long as they pay you up to double the amount of what you paid to conquer the country in the first place.

The price increase is hard coded into the smart contract and follow this model:

The ownership of each player’s country is also represented in the game’s interactive world map that is ever evolving and updates in real-time with data from the blockchain. CryptoCountries places a heavy emphasis on their game on foreign buying, trading, and selling. 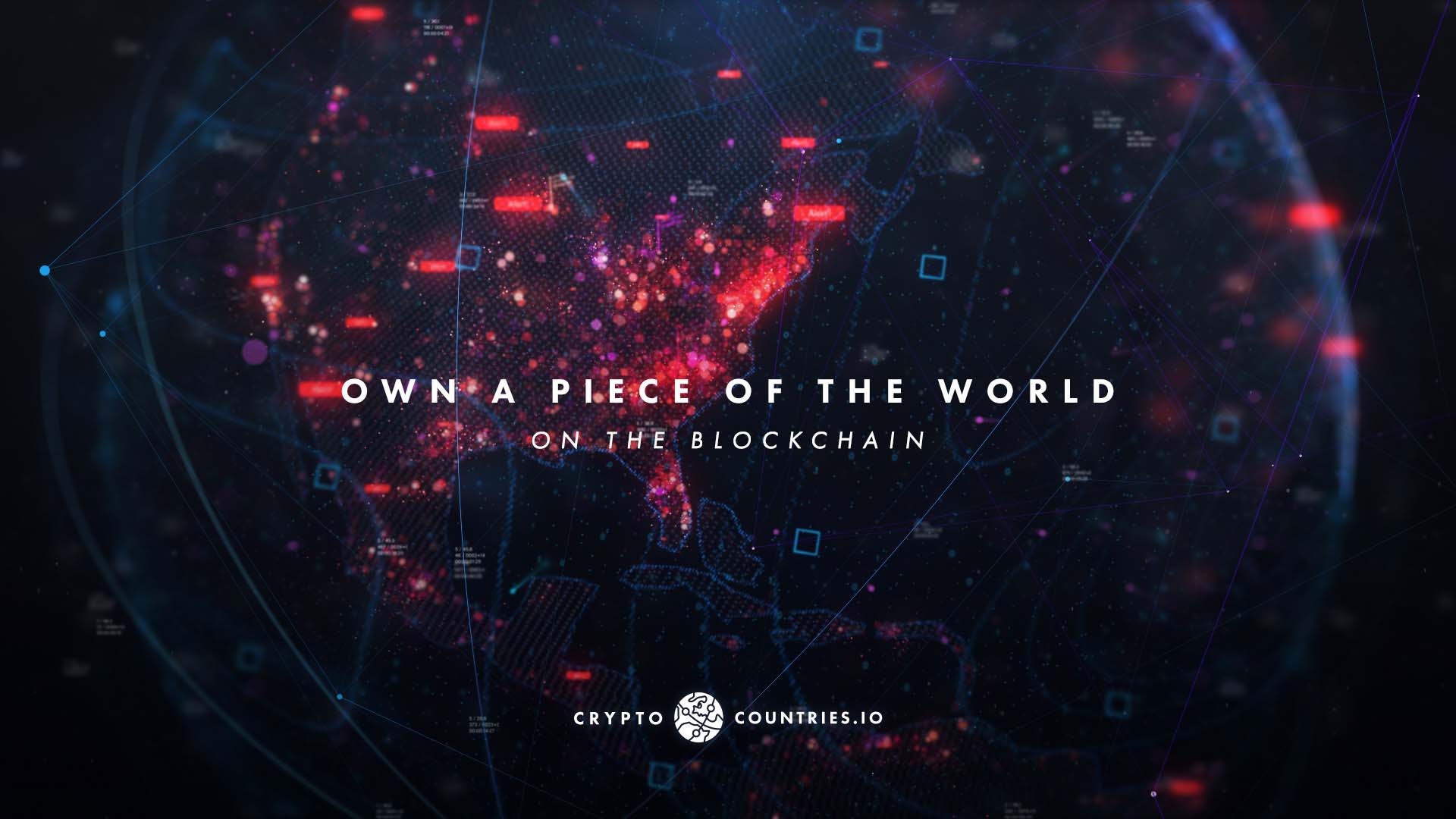 Within 3 days of its release, CryptoCountries has received more than 1500 transactions from different users trying to acquire their favorite countries. What’s more astounding, however, is the amount of traction the game gained since its launch – in the past week alone, 35,768.51 ether has passed through CryptoCountries’ system, compared to 1,551.16 on CryptoKitties. In other words, the game has had $25,000,000 in Ethereum transactions in the last 24 hours.

CryptoCountries is now by far- the biggest game ever in ETH history. Currently, the most expensive country is Japan, which costs 709 ether, $658,508 according to current metrics.

“We are seeing a new kind of game concept that is made possible by the Ethereum blockchain,” he said. 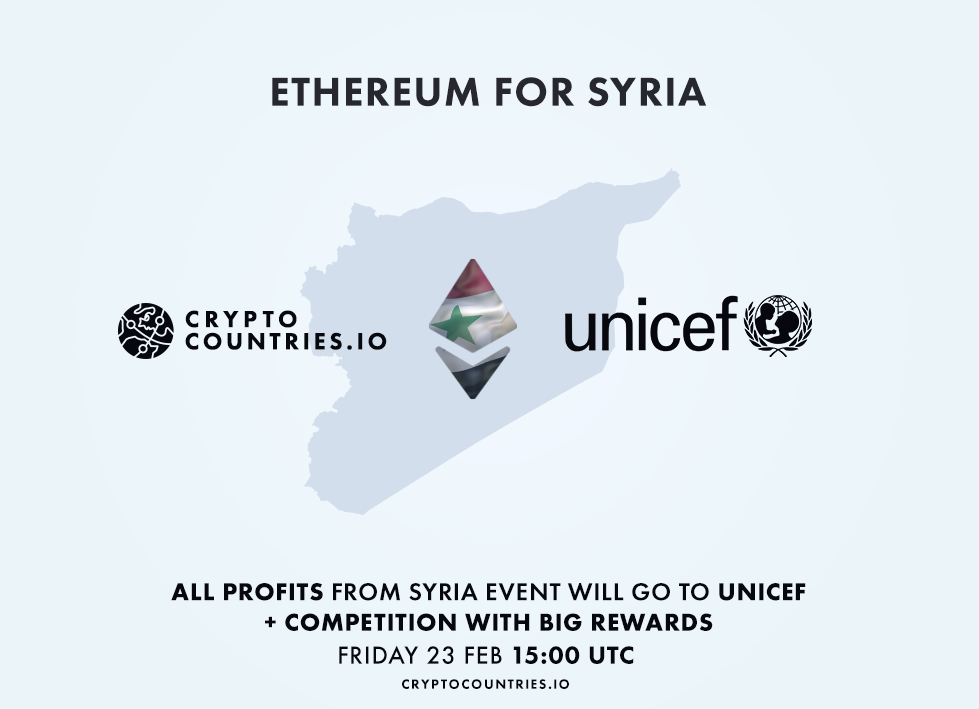 This Friday CryptoCountries launches a special event making a positive contribution to the crisis in Syria where the country will be made available for purchase. Now you can own the digital version on the blockchain, and by doing that you will help the people locally. All the profits (including developers cut) made from the sale will be donated to Unicef who strongly fights to save children’s lives, defend their rights, and to help them fulfill their potential.

The competition starts at 3PM UTC time on Friday, lasts for 24 hours and offers additional rewards to participants.

For more information, feel free to check out the links below: