Will Blockchain Do to Banks What the Internet did to Conventional Media?

Marking the ninth anniversary of Satoshi Nakamoto’s revolutionary white paper, the CBOE Global Markets and the CME Group decided to introduce Bitcoin to their futures trading platform. This unprecedented move by some of the largest financial institutions in the world can be seen as a pivotal moment in the digital currency’s history. Without a doubt, the future of blockchain technology has never been brighter.

Despite claims of Bitcoin being a bubble reminiscent to that of the Tulip Mania, it is undeniable that 2017 has been a phenomenal year for the world’s largest cryptocurrency. From media exposure to wallet downloads to trading volumes and market capitalization, Bitcoin has shown signs of exponential growth across nearly all metrics of adoption.

Take a look at the comparison between the Google search trends for ‘buy bitcoin’ and ‘buy gold’: 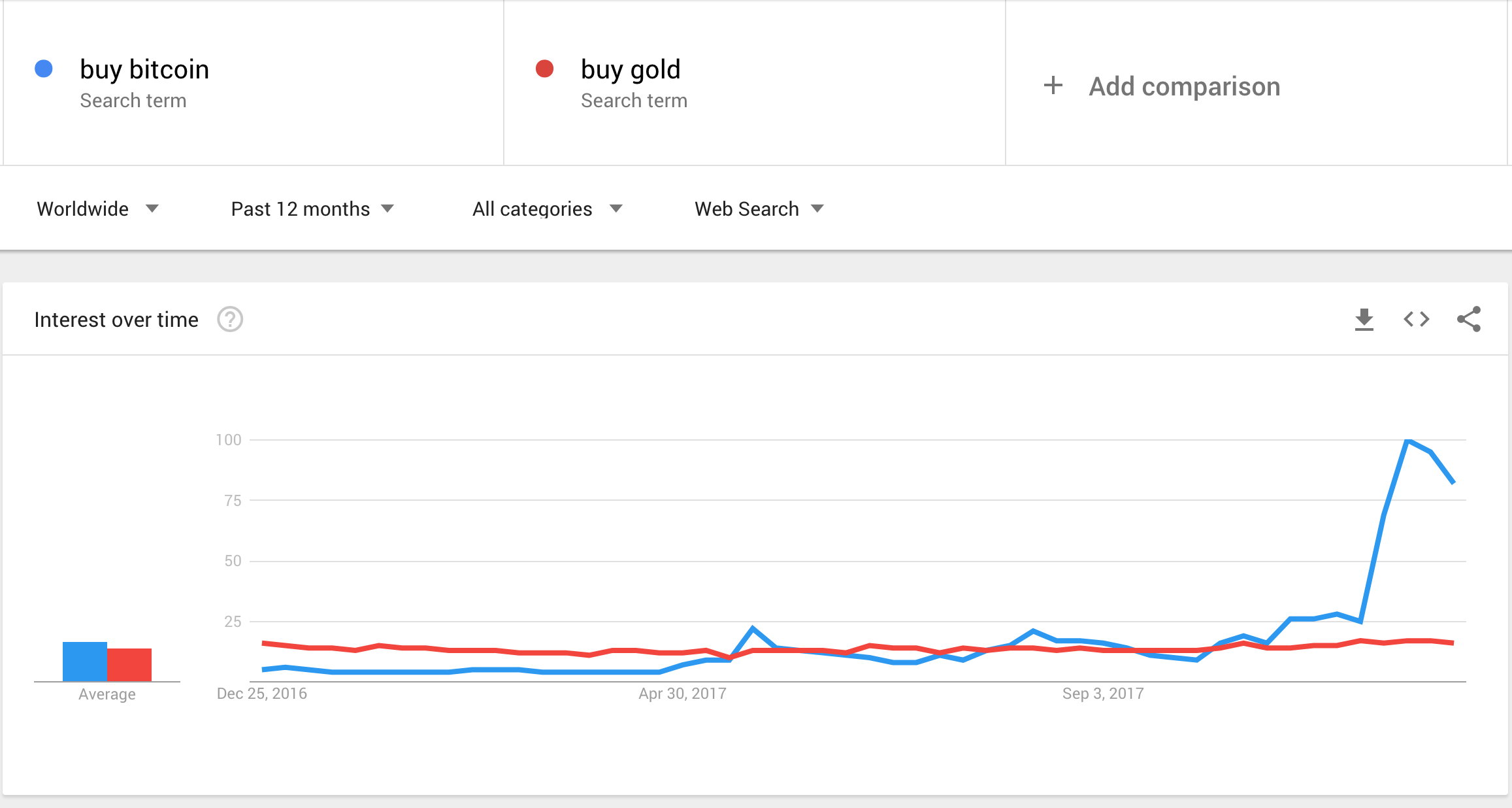 The addition of Bitcoin to CBOE and CME’s offerings has effectively integrated the virtual currency into traditional, regulated markets, which increases its legitimacy and helps dissuade those who doubt its longevity and think that it’s a fraud. As the word ‘Bitcoin’ becomes more and more of a household term, the number of people who believe in its technology has been gradually increasing.

“I am uniquely allergic to the word ‘legitimacy,’ it makes me want to vomit when warmongering, war profiteering bankers use it to describe Bitcoin. That takes a lot of audacity.”

He is right. Blockchain, the technology that powers Bitcoin and other cryptocurrencies, should give banks a run for their money. The decentralized blockchain system that facilitates Bitcoin transactions is everything that the modern financial system isn’t – it allows us to transfer digital cash in vast amounts, across any border, instantaneously, with a minimal transaction fee. The blockchain ensures a secure and fraud-proof transaction experience with no transaction limit, without having to worry about tax liabilities when it comes to overseas transactions.

The modern financial system is based on a double-entry bookkeeping system – a system that revolutionized the field of financial accounting during the Renaissance period. As a comparison, the blockchain technology is based on a triple-entry system. Now that it has been approximately 300 years since the end of the Renaissance period, the financial system that we know of is gradually becoming outdated and it could be as severely challenged by the new and upcoming blockchain technology as newspapers were by online news sources.

However, Bitcoin and other cryptocurrencies might not be the most reliable way of storing value, unlike good old fiat currencies. This is because Bitcoin is famous (or infamous) for its price fluctuations – the price of Bitcoin can increase by 1000% in less than a year before losing nearly $10,000 in a matter of days. Nonetheless, it is the technology behind Bitcoin – blockchain technology – that banks have to integrate into their system if they wish to remain in business.